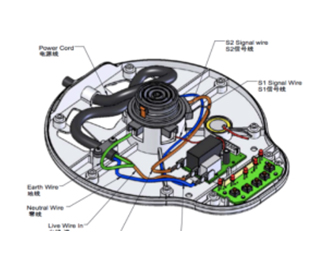 This project started on May 14th when I was at my desk dealing with inquiries online. Suddenly I was told to engage in a video meeting from nowhere, which turned out to be Mr. Patrick, a sagacious Italian engineer, and his kettle.

By briefly looking through its product specification, this project consists of three parts: electronic motherboard, house injection, and harness deployment as the concept map is shown below. Obviously, we set off handling the electronic part to drive the circuit board functioning as a kettle.

The kettle has four printed circuit boards to be produced: 1x MCU motherboard, 2x white led ring, and 1x control panel board. During the meeting, we exchange the idea of possible practical problems in PCB craftsmanship and went through each 2D design drawing.

Next topic for discussion: software development.

With all precautions on PCB design confirmed, we start to carry out a PCB layout to meet electrical parameters in a given dimension on the 22nd of May. We pleasantly went through each location of components involved like a buzzer, connector, reset switch, and details as 2D design depict. We discussed in which way two led rings connect one by another. Rather than a soldering solution, Mr. Patrick is likely to connect them with wire.

Having been revised for several versions, Mr. Patrick come into an agreement on all details on each circuit board on 1st, June, which is affirmative news for us to set out to bill of materials(BoM). By the time we process to BoM, we had a meeting to check all connectors in demand. It’s crucial to understand each plug and socket well as he is planning to purchase a connecting cable for a harness connection.

We update the bill of materials to Mr. Patrick another day after 1st, June when PCB was ready to produce. After 10 days of the manufacturing process, the PCB sample chart was finally out for assembly. Check how amazingly stunning they were. Also part of BoM was list below. Mr. Patrick and I were verifying each selection of electronic components to customize his idea smart kettle – Of course, this was done under the suggestion of our professional engineers for double-checking.

On the 10th of July, we had our PCB with components assembled come out, this was done by Leadsintec. They were doing physical functioning on each PCB for us, making sure there will be no more physical issues while burning firmware into the chip. We were also awaiting the firmware developing process to go as we discussed, display, button and led light coordinately working in order to accomplish kettle function.

Driving a 4x Matrix display screen seemed to be challenging and we finally made it happen to output a stable illuminating effect on 15th August. We tested the program with PCB and it did do an excellent job! Now we are ready to deliver PCB sample charts to surprise him! Hereby to thanks all colleagues for their contribution to this project. Mr. Patrick, thanks for your kind trust in us.Delivering great quality