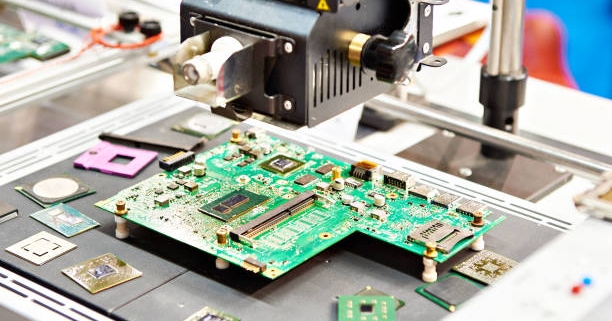 The working principle of PCB board

The smartphone you use has a long, uncluttered line. The main function of these lines is to integrate the hardware devices of the mobile phone into a single PCBA, including Wi-Fi, antenna, GPS, fingerprint sensor, etc. In the following content, FS Technology will take a mobile phone as an example to show you how the PCB works.

You may have seen a board like this, it may be green or some other color. What appears to be a simple circuit board is actually a multi-layered labyrinth of hundreds of copper wires. The PCB provides support and effective blocking for all components mounted on its surface, and the lines in the middle of the board provide a platform for communication and collaboration between components. 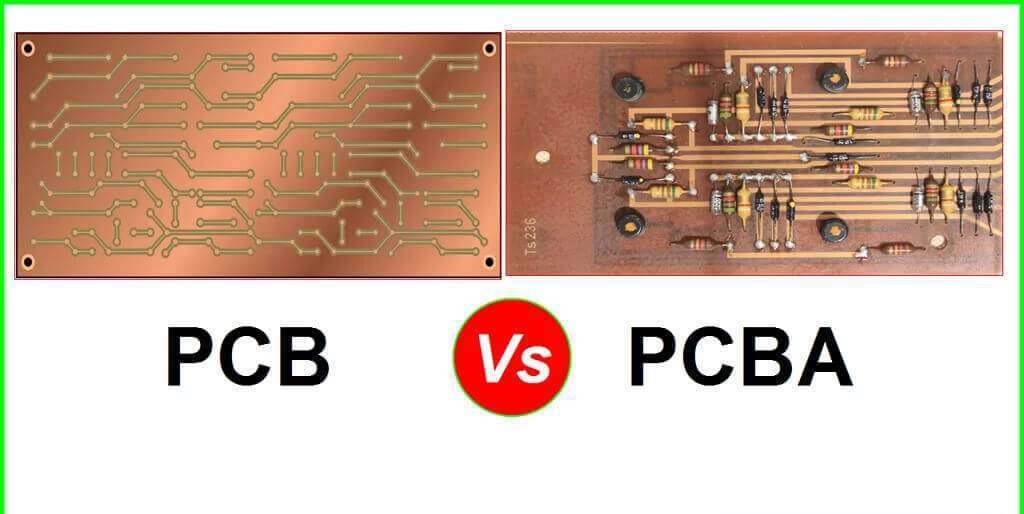 For practitioners in the non-PCBA industry, it is easy to confuse the concepts of PCB and PCBA. In fact, PCB is the abbreviation of the printed circuit board, and PCBA is the abbreviation of the printed circuit board assembly. There are essential differences between the two. Usually, we call the conductive pattern formed by the combination of the circuit and the printed component on the insulating material according to the predetermined design as the PCB, and the board on which electronic components have been installed called PCBA.

PCBs are made by isolating the surface copper foil conductive layer through the board base insulation material, which allows current to flow through various components along a pre-designed route, ultimately achieving functions such as power making, amplification, attenuation, modulation, demodulation, and coding. This is a description from a PCBA government website. It may not be easy for non-industry practitioners to understand. FS Technology will disassemble the working principle of the entire mobile phone PCBA to show you.

Connection of PCBA traces to components

Understanding how a printed circuit board works should start with its composition. The entire PCBA board is composed of bare boards and components, such as microchips, resistors, capacitors and connectors. Manufacturers attach components to the PCB by solder mounting or other techniques. Take, for example, a single-sided PCB, a board that has electronic components and wires on only one side of the board. Usually, we mount the components on a non-conductive board by SMT assembly technology or PCBA DIP assembly technology and connect them through small paths called traces. The traces allow the electrical components on the entire board to function by energizing them. Not all hardware devices are directly mounted on the PCB, components such as monitors and cameras are attached to the PCB through mating connectors and flat cables.

The working principle of double-sided and multi-layer circuit boards is to introduce process gas (Ar, N2, O2, etc.) in the high vacuum link, and the gas is ionized into plasma. Under the action of the electric field, these plasmas move toward high potential and low potential respectively. The atomic groups moving toward the low potential bombard the target (copper), so that the copper atoms are stripped from the copper, and finally covered on the substrate (FRP), that is, the copper-clad laminate. This is a traditional physical method, which has the advantages of no pollution and mature technology. The disadvantage is that the efficiency is slow and the cycle is long. If you want to quickly realize the PCB manufacturing process, you can lay the etched pattern in advance, and then form the PCB in the above way, and the inner hole for connection can also be plated with metal copper to make it metalized.

The picture below is the PCB board taken by FS Technology through X-ray. The dark area in the figure represents the wire or trace, and its part is made of a non-conductive insulator material made of woven glass fiber and an FR4 epoxy resin material adhesive. In this X-ray image, you can see that even though there are many wires stacked on top of each other on the board, they are not in any contact with each other. 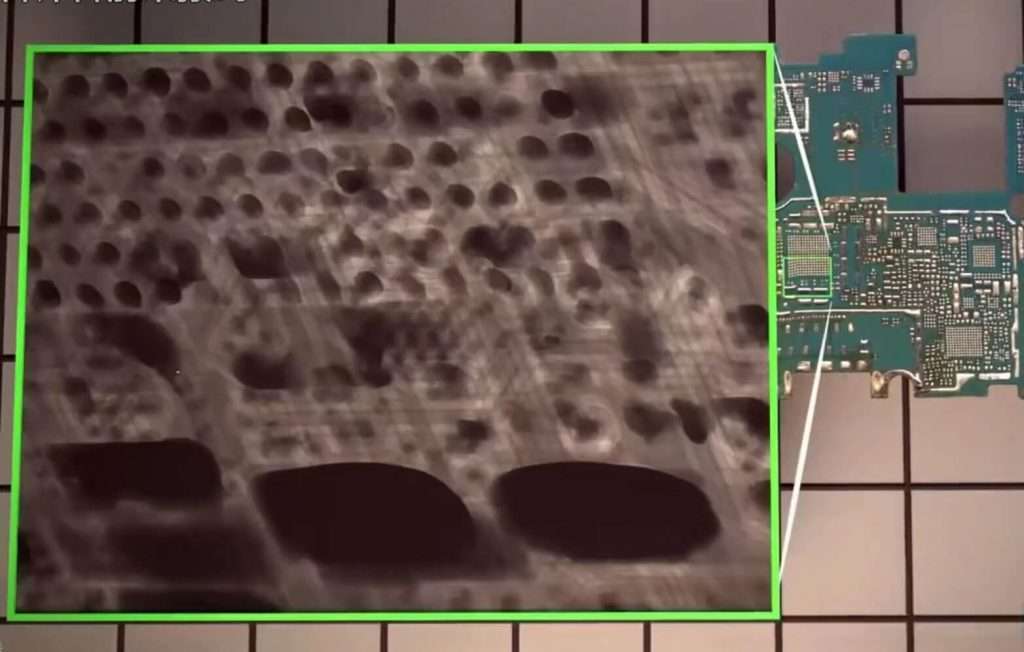 The picture below is the key to the operation and function of the mobile phone circuit board – the microchip, referred to as a system-on-a-chip or SoC for short. Because it is mounted in a grid of connection points on the PCB (pads of the ball blue array), the hub is connected to a wire or trace that runs through the PCB. There are also many pads on the PCBA where other microchips are mounted, such as memory chips and wireless chips as well as resistors, capacitors, and other components.

Next, let’s focus on a small set of wires. As mentioned above, there are a lot of wires inside the phone, and the total length of these wires can go around a football field. In the image below we can see that there are 15 traces connecting the SOC and the 16MP rear camera, if more traces are used, it means more data can be sent. If you look closely, you will see that as these traces are numerous, they are independent of each other. To make it easier to understand the traces, the diagram below shows just one set of wires, but the traces in the phone are actually routed along the edge of the printed circuit board and connected to a flat cable to the touchscreen display. All these tiny signal lines have to go through the mobile PCBA board to work. PS: The width is less than 1 mm. 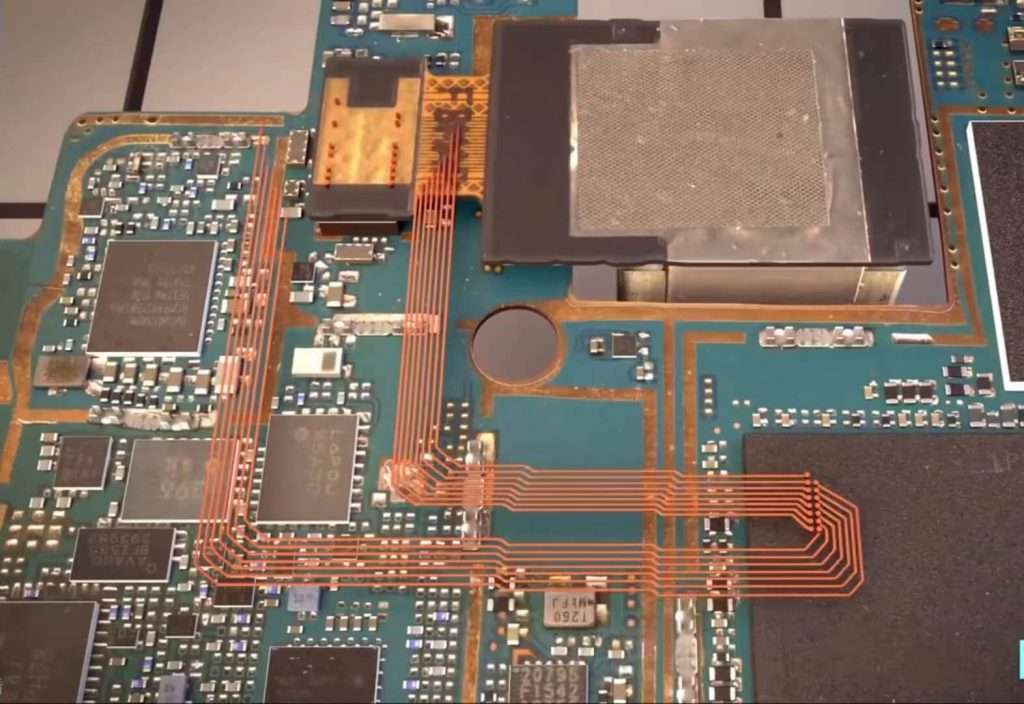 In short, the PCB enables each component to connect to the SoC or other microchip through hundreds of wires and is organized quite precisely.

The composition of the PCB board

This smartphone PCB is actually made up of ten conductive layers, the top and bottom layers of which are used to mount the PCBA components and act as multiple antennas. In order for it to function properly, power and ground planes are included on every circuit board. In addition, the ground plane also has the functions of electromagnetic shielding and heat dissipation. The remaining four intermediate layers are used to carry all communication lines or signal lines. Each conductive layer contains copper and insulating fiberglass and epoxy. The smartphone PCBA shown here has only 10 conductive layers, but in other applications they can have 2 to 50 more layers. FS Technology can produce multilayer PCBA with up to 56 layers. 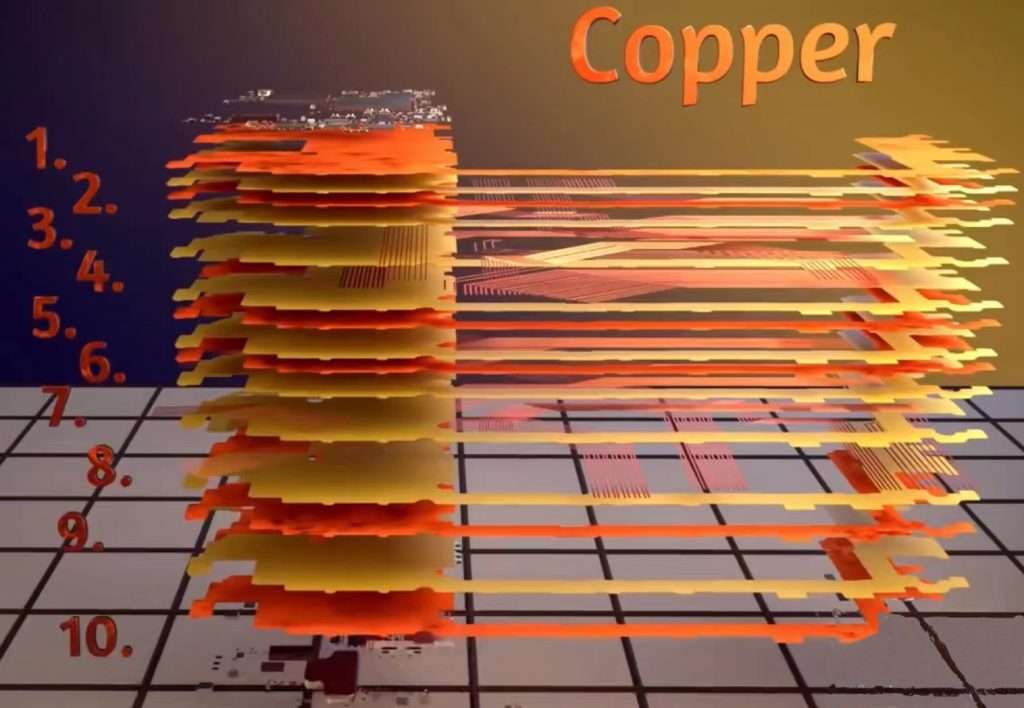 In addition, on the top and bottom of the PCBA is a layer of colored solder mask, which acts as electrical insulation and thus makes the pads of the components available. Above it is the silkscreen, including ink for marking and letters indicating the location of the components. 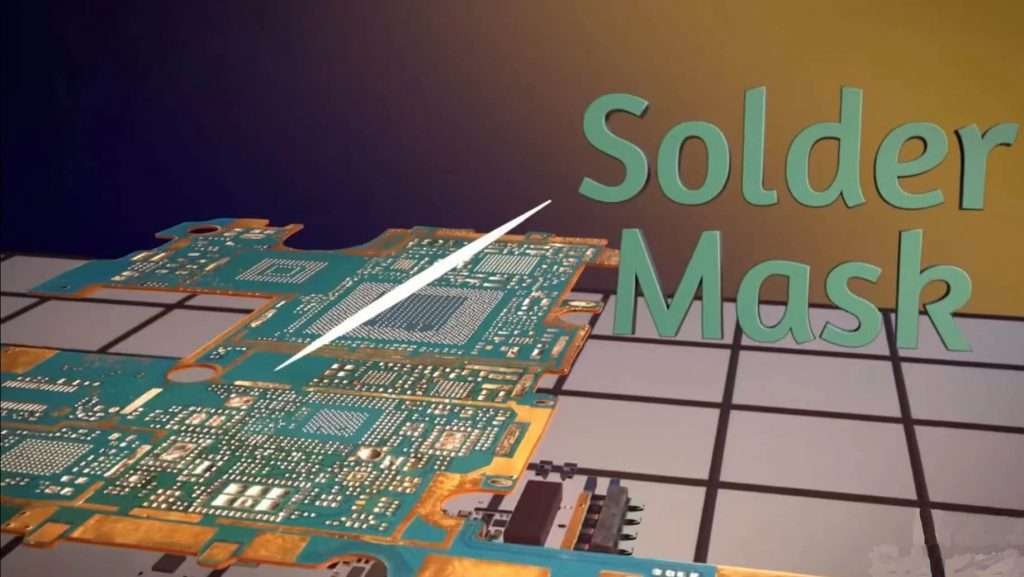 The PCB layers perform this function by drilling or metal plating the signals through vias or vertical interconnects. These vias connect the wires of each layer to each other, thereby connecting multiple components and realizing the work of multi-layer boards. There are three types of vias that can be achieved with the PCB manufacturing technology of Chinese manufacturers. 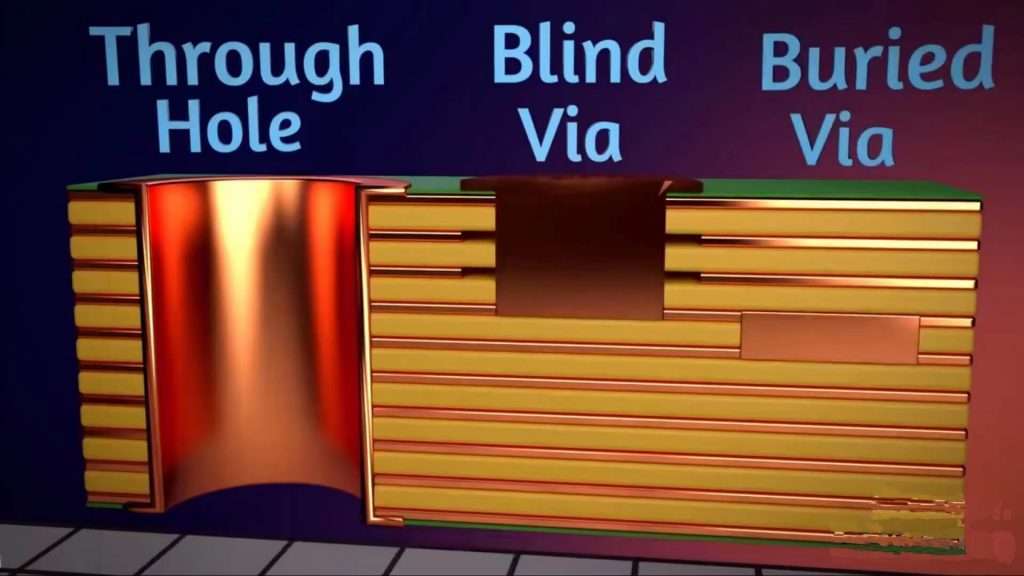 Since this process requires traversing many layers, when traversing unconnected conductive layers, the copper around the vias on that layer is removed. If we take an X-ray to look at the pads on the top of the PCB for mounting, you can see three sets of wires running in different directions, while holes go through each layer.

These complex wires exist on the PCB in the center of the phone, and they are so incredible. Each model of smartphone is different in shape and specification, so engineers need to use PCB design tools to design different types of PCBA. For example, some mobile phones have separate top and bottom PCB boards, the larger one is called the main board and the smaller one is called the daughter board. 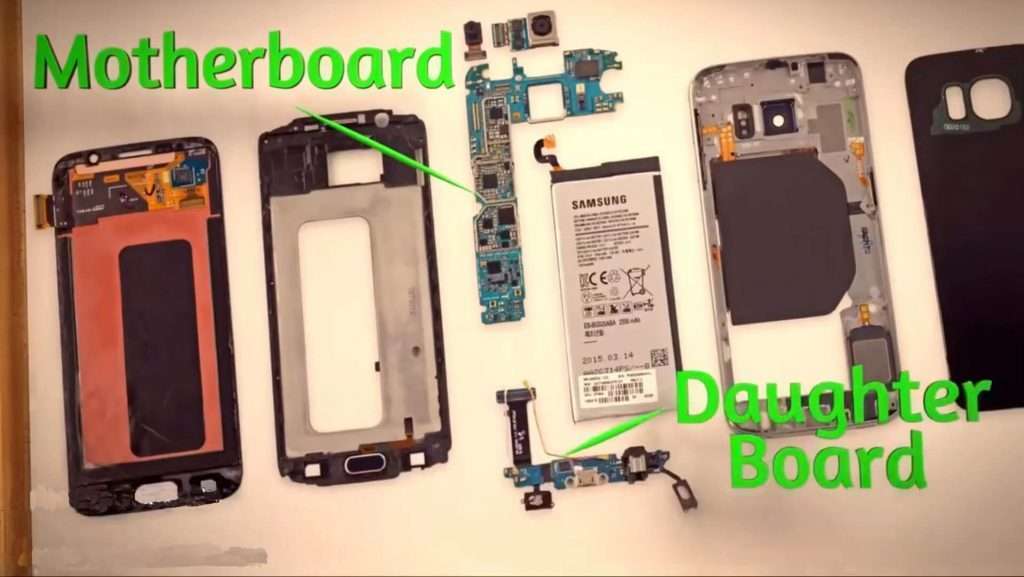 Another important detail is that the PCB is lighter, weighing only a tablespoon of water, and will fit nicely in your phone. Engineers are constantly innovating to make microchips, resistors, capacitors, inductors, and connectors as small as possible, with some components smaller than a flea.

The above is a summary of “How does a PCB board work”  I believe that after reading this article, you have a deep understanding of PCBA:)

How to Perform PCB Design Review and Layout Clean-Up | Leadsintec

BENEFITS OF PCBS IN MEDICAL DEVICES | LEADSINTEC
Scroll to top