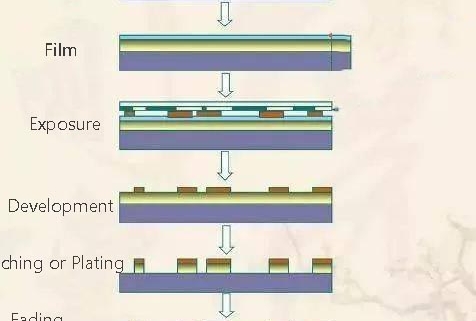 Refers to the PCB design engineers to design the unit graphics.

Refers to the engineer to improve production efficiency, facilitate production and other reasons, multiple UNIT put together into a whole graphic. We often say that the puzzle includes the unit graphics, process edge, etc.

Refers to the PCB manufacturers production, in order to improve efficiency, facilitate production and other reasons, multiple set together and add tooling board edge, structure of a board.

Inner dry film is the process of transferring the inner layer of line graphics to the PCB board.

The inner dry film includes multiple processes such as inner lamination, exposure development, and inner etching. Inner lamination is to put a special light-sensitive film on the surface of the copper plate, which is what we call dry film. This film will be cured by light, forming a protective film on board.

Exposure development is to expose the board with the film applied, the light-transmitting part is cured, and the part that is not light-transmitting is still dry film. Then after developing, the uncured dry film is removed and the board with the cured protective film is etched. Then it goes through the de-filming process, at which time the inner layer of line graphics is transferred to the board. The whole process flow is shown below. 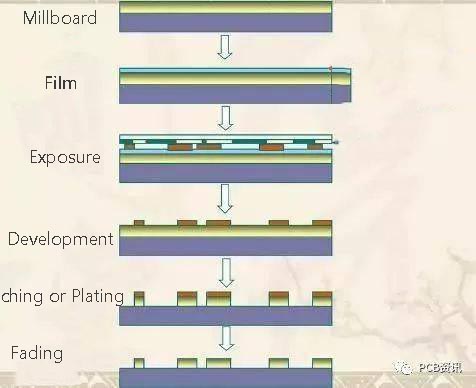 For designers, our main consideration is the minimum line width of the wiring, the control of the spacing and the uniformity of the wiring. Because the spacing is too small will cause the film to be clamped and the film cannot fade out causing a short circuit.

The line width is too small, and the adhesion of the film is insufficient, causing an open circuit in the line. Therefore, the safe spacing in circuit design (including line and line, line and pad, pad and pad, line and copper surface, etc.) must be considered for production.

The main role of grinding plate: The basic pre-treatment is predominantly to solve the problem of surface cleanliness and surface roughness. Remove oxidation, increase the roughness of copper surface, and facilitate the film to connect to the copper surface. 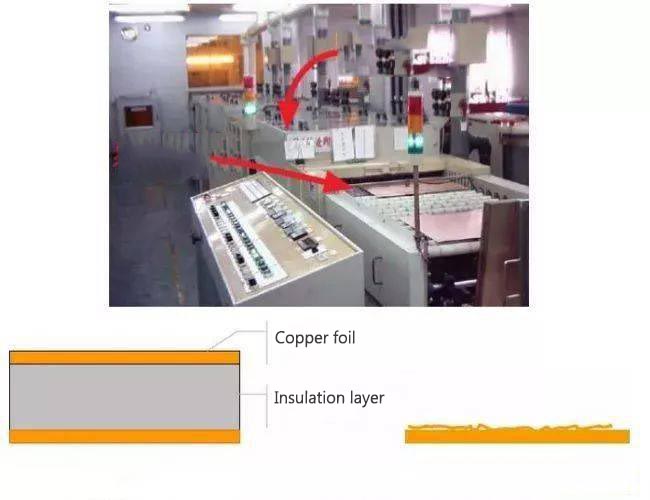 The treated substrates are heat squeezed or coated with dry or wet film for subsequent exposure production. 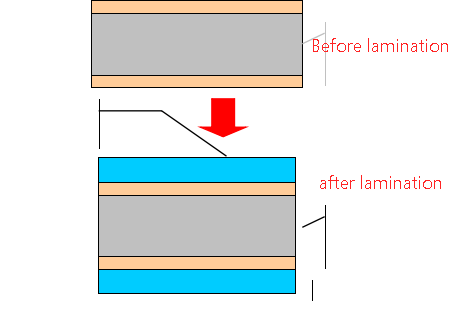 The negative is aligned with the pressed dry film substrate and the negative graphics are transferred to the light-sensitive dry film using ultraviolet light irradiation on the exposure machine. 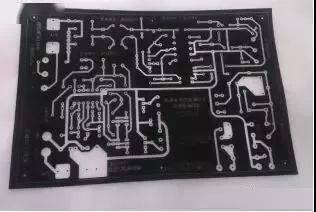 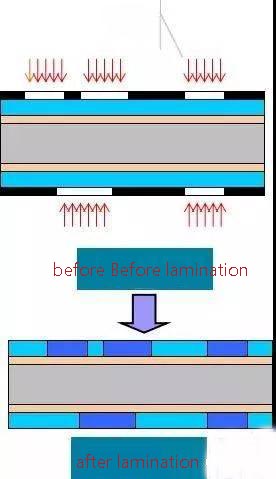 Using the weak alkalinity of the developer (sodium carbonate), the unexposed dry/wet film becomes dissolved and washed away, while the exposed portion is retained.

The unexposed dry/wet film is removed by the developer to expose the copper surface, and this exposed copper surface is dissolved and etched away with acidic copper chloride to obtain the desired line.

The exposed dry film protecting the copper surface is stripped off with sodium hydroxide solution to highlight the line graphics.

Purpose: It is to form a microscopic rough and organic metal layer on the inner copper surface to enhance the adhesion between the layers.

Process principle: The chemical treatment produces a homogeneous, organometallic layer structure with good bonding characteristics, which allows controlled roughening of the copper surface prior to the inner layer bonding and is used to enhance the bonding strength between the inner copper layer and the semi-cured sheet after lamination.

Lamination is the process of bonding the various layers of the circuit into a whole by means of the adhesive properties of the pp sheet. This bonding is achieved by the mutual diffusion and penetration of macromolecules at the interface, which results in interweaving.

The discrete multilayers are pressed together with PP sheets to form multilayers with the required number of layers and thickness. In practice, the materials such as copper foil, bonding sheet (semi-cured sheet), inner sheet, stainless steel, isolation sheet, kraft paper and outer sheet are laminated according to the process requirements.

Therefore, if the laminate is not uniform on both sides, the stress on both sides is not the same, causing the board to bend to one side, greatly affecting PCB performance.

In order to avoid these problems, the uniformity of copper distribution, the symmetry of the stack, the design arrangement of the blind burial holes and other aspects must be considered in detail during the design.

It is also called chemical copper, after drilling the PCB board in the sink copper cylinder oxidation reduction reaction, the formation of copper layer so that the whole hole metallization, so that the original insulated substrate surface deposited copper, to achieve the electrical interlayer communication.

Make just sink copper out of the PCB board for board surface, hole copper thickening to 5-8um, to prevent the thin copper in the hole before the graphic plating is oxidized, micro-etching off and leakage of the substrate.

The same process as for the inner dry film.

Plating the holes and line copper layer to a certain thickness (20-25um) to meet the final PCB board finished copper thickness requirements. And etch off the copper that is not used on the board to reveal the useful line graphics.

Solder resist, also known as anti-solder, green oil, is one of the most critical processes in the production of printed circuit boards, mainly through screen printing or coated with solder resist ink, coated with a layer of solder resist on the surface of the board, through exposure development, to reveal the disk and holes to be soldered, other places covered with a solder resist layer to prevent short circuits when soldering

The desired text, logo or part symbol is printed on the board surface by stencil printing and then exposed to UV light.

The solderability of bare copper itself is very good, but long-term exposure to air is susceptible to moisture oxidation and tends to exist in the form of oxide, which is unlikely to remain as the original copper for a long time, so the surface treatment of the copper surface is required.

Cut the PCB to the desired form factor by CNC molding machine.

It’s necessarily that analog actually state of the board, power on for electrical performance checks, whether there is an open, short circuit.

Check the appearance, size, aperture, thickness and marking of the board to satisfy customer requirements. Pack qualified products into bundles for easy storage and delivery.

From a soldering point of view, 5 tips for designing PCB! | Leadsintec

How can you correctly answer these questions about high-speed PCB? | Leadsi...
Scroll to top